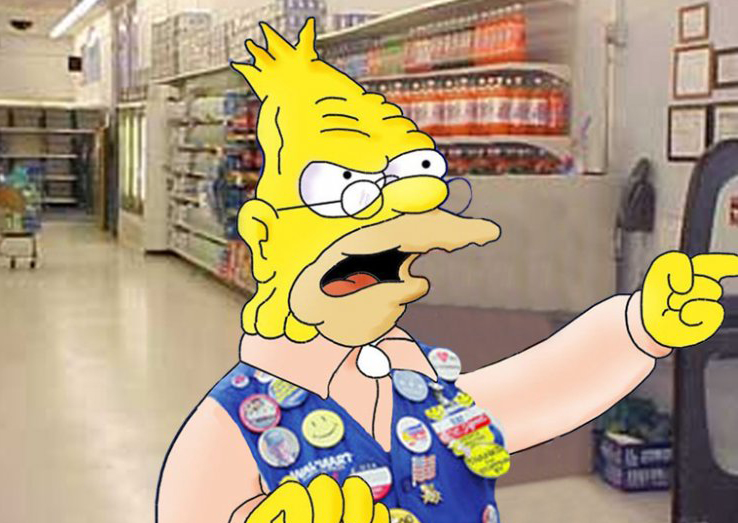 Wal-Mart corporate lore says that the idea for the greeter was born in Louisana, when none other than Sam Walton himself walked into a store with a shoplifing problem and was welcomed by an “associate” put there by the store manager. His charge? To welcome customers and make sure merchandise was paid for. Eventually, this idea was deemed to be so great that it has been instituted in every other store across the country.

The Wal-Mart greeter was born.

Thirty plus years later and this grand plan has not been re-evaluated. I’d like to suggest it is high time to take a look at whether these greeters are necessary, effective or capable of accomplishing their relatively basic jobs.

Rarely do I walk into a Wal-Mart where a greeter actually says “Hello” or “Hi” or even acknowledge that I am indeed entering their store. I’ll often greet them and often times get a startled response. 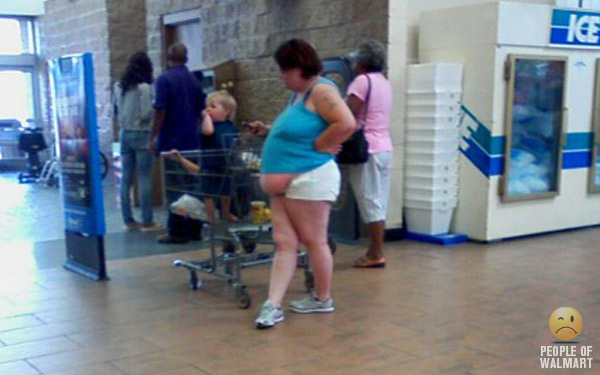 Though as a greeter, based on some of the clientele entering a Wal-Mart, I wouldn’t speak to them either. For a lot more examples go to: www.peopleofwalmart.com

Want to return something? Not without a sticker.

Usually, the employees posted up front are wrangling carts, talking with other associates, lazy or trying to figure out how to print out a label so a customer can return something.

Greeters are integral to the return system, which also sucks.

Wal-Mart, I realize that people steal a lot of stuff from your stores. I realize that measures need to be in place to protect against shoplifing. It used to be that you would use an old price gun and put a pink sticker on the return to prove that it had been brought in and not taken off the shelf. Low tech and relatively fast. 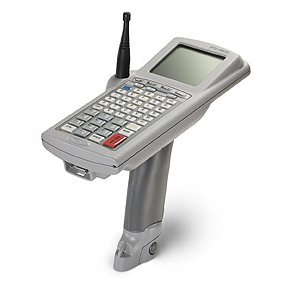 The system now? These older and slower individuals are using handheld computers with tiny buttons. They scan every item. They print out labels out for every item.

Here’s a recent example of this wonderfully efficient system: I was returning 3 items that were less than $10. First, Mr. Greeter was unable to find the barcode. Once he did, he scanned the entire length of all three items to make sure he hit the UPC code. After fumbling around with the handheld computer, the labels printed, but he didn’t have the dexterity to tear them off; he had to cut them off with scissors. The total amount of time this took? Over 5 minutes.

What is the point of this insanity? Low-tech and funtional has been replaced with high-tech, pointless and downright stupid. Will the return desk take anything back without a greeter-printed sticker? No, the system collapse, and I’m left wondering why I didn’t just go to Target in the first place.

I would also wager that the amount of shrinkage from incompetence and employee theft far outweighs that which is prevented by this greeter-based checkpoint in the return process.

Besides welcoming shoppers, the greeter is also supposed to make sure merchandise is not leaving the store when it hasn’t been paid for. As every Wal-Mart I’ve been too recently has an electronic inventory control system, it would seem this job has been effectively outsourced. Though, even when the bells and whistles sound, no associate stops the shopper to check what piece of merchandise is leaving the store. 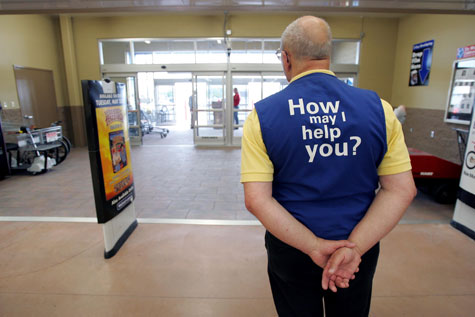 So why don’t greeters greet?

30 years ago, there were 2-4 doors to cover the store as people entered, it was easier for shoppers to be greeted. Now, there’s a good 50 feet of entryway to cover. These folks aren’t up to the task.

More likely someone in middle management in Bentonville, Arkansas decided that they could utilize an existing paradigm to synergize the merchandise re-entry system  and customer acknowledgement initiative and by doing so would save zillions of dollars. In the process they distracted the greeter from doing the one thing that it is clear they should be doing when someone enters the store; say, “Hello”.

Next cost savings initiative? Get rid of the blue smocks and replace them with the cheaper bag uniform scene here: 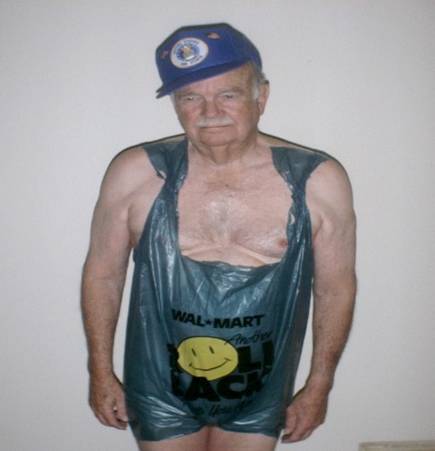 To sum up, most greeters should not be employed. They should be retired. They should be playing shuffleboard and catching the early bird special at 4pm. I understand that such picturesque retirement is not an option for all. But if they must work as greeters, then for the love of all that is holy, please fulfill the title.