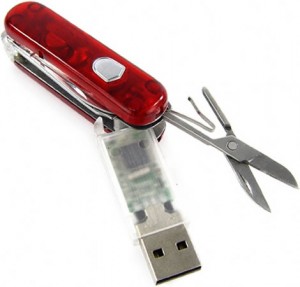 If you are like me, you have several USB Keys sitting around doing nothing. It’s time to repurpose those old drives. Turn them into a swiss-army drive that contains any possible program you might need . . . and for free!

I’ve been a big fan of the Portable Apps suite for some time. Granted, most of my software is installed locally, but it’s nice to have an alternative at hand on a spare flash drive for use in a pinch.

Having portable applications was great, but Portable Apps don’t update their application list to new version often enough for my liking and the update process was also more manual than I would have liked.

Enter Liberkey.  I haven’t noticed any apps missing from any of their suites that I used before. In addition, they have a great updating utility. The apps also seem to be updated to the current full version more quickly too.

I’d highly recommend installing LiberKey and giving it a try.

Appreciate the Nerds in Your Life: Sys Admin DayA Disappointing Start to “So You Think You Can Dance” Season 6
Scroll to top